In this post I’ll demonstrate how to create a Reynolds number calculator in Excel that can:

A snapshot of the finished product is below:

Of course, the first thing this spreadsheet needs is a place to type the input values. We’ll assume that the user knows the fluid velocity, characteristic length (diameter for a pipe, hydraulic diameter for a non-circular tube or open channel, or length for a flat plate), and kinematic viscosity.

We can make the spreadsheet so that it accepts multiple units for each of the inputs. Later, we’ll use the CONVERT function to convert the input values from whatever unit is entered to SI units to calculate the Reynolds number.

But for now, we need to make sure the user enters an acceptable unit for velocity. Since the allowable values for velocity in the CONVERT function are very limited, we’ll allow the user to enter both the length and time units and convert both of them in a single formula later on.

To control the units for length, we can make use of Data Validation, which is found in the ribbon under Data>Data Validation. We’ll force the user to enter values that are contained in a list of pre-populated length units.

To do this in the Data Validation window, first Allow: List.

See also  How to Use the Excel Text Import Wizard

Next, in the Source field, enter mm,cm,m,in,ft,yd. Note that these units are entered without spaces!

What’s great about the List form of Data Validation is that it also automatically creates an in-cell dropdown menu. That way, when a user clicks on the cell, they can click the gray button that appears and choose a value from the dropdown list, rather than guessing at what values might be acceptable. 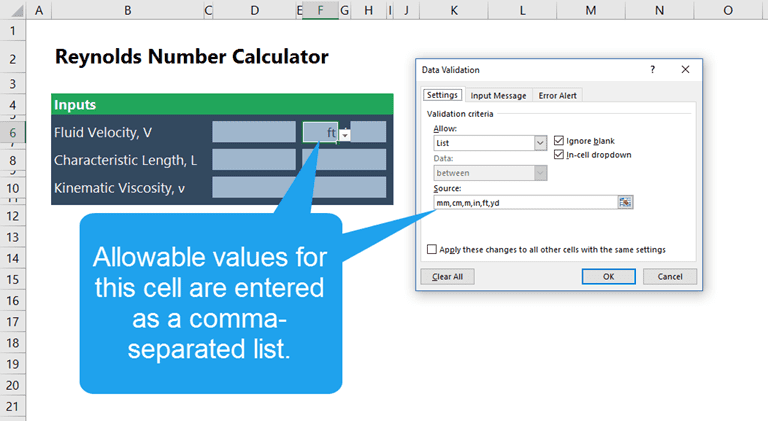 We can repeat the same process of setting up Data Validation lists for the time unit in velocity by entering these units of time as the source:

For the length units, we can simply copy cell F6 to F8.

We’ll create a new section in the Reynolds number calculator, which will be used to get the velocity, length, and viscosity values converted to consistent SI units of m/s, m, and m^2/s, respectively. I prefer this approach rather than trying to stuff all of the helper formulas into one massive formula. Doing it this way with an intermediate step makes it easier to understand the calculations and troubleshoot later on if something is going wrong.

Since we’ve entered two base units for the velocity, we can use the CONVERT function twice in a single to make the conversion from whatever velocity unit is input to m/s. The formula to use here is:

The first part of the formula, CONVERT(D6,F6,F14), converts from the input length unit to meters. Then we divide by the second part of the function, CONVERT(1,H6,H14), to get the factor to convert from the input time unit to seconds. In the second CONVERT function, we use an input value of 1 because we’ve already used the velocity value in the first conversion. Here we need just the factor, not the value multiplied by the factor 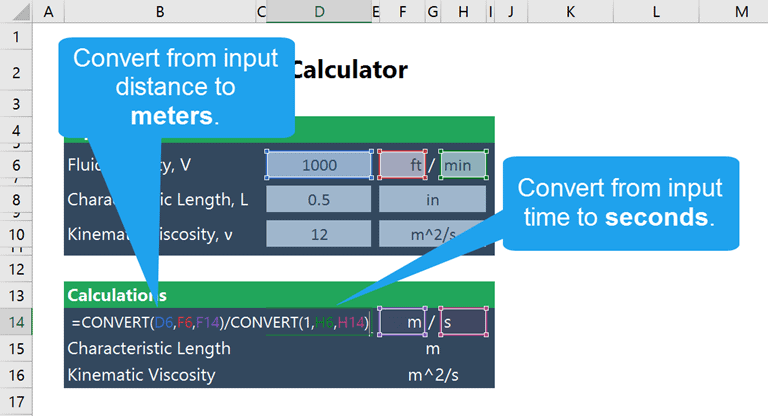 Converting from the length is much easier. The formula is simply:

For the viscosity conversion we have to use a different approach. The Excel conversion function doesn’t convert between units of viscosity. Thankfully, though, there are really only two typical values of kinematic viscosity that are used: cSt and m^2/s. So we can handle this with just a simple IF function. 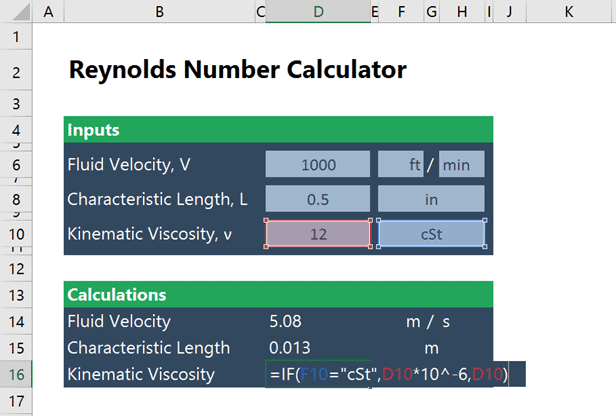 To calculate the Reynolds number, we can name the input variables for Velocity (V), Length (L), and Viscosity (nu) in the intermediate calculations section. Then, we can use those cell names directly in the formula rather than referencing their cells.

Last but not least, we can create a formula to return a sentence that tells us if the flow is turbulent, transitional, or laminar by using the concatenate operator (&) and a nested IF function. The nested IF function works well here because there are three alternatives:

If you followed along with this post and tried to build the Reynolds number calculator yourself, way to go! You should have something that looks similar to this: