One of the tips in my eBook that gets a lot of response is to use the CONVERT function to convert units in Excel. It’s one of those hidden gems in Excel that I wish I had found much sooner.

Given that we spend so much time working with data in mixed unit systems, this could be the most important Excel function for engineers.

It’s a pretty straightforward function to use, but here are a few tips that will make it even easier to implement in your spreadsheets. 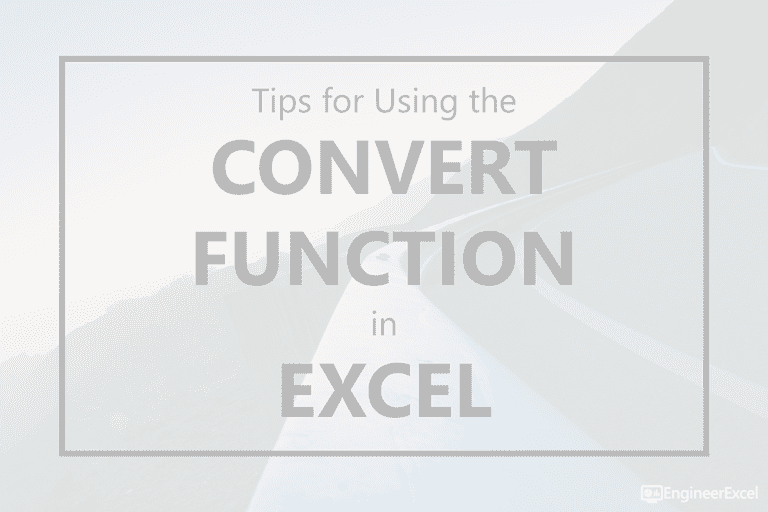 The syntax is really simple. Just provide the value, the current units, and the desired units. The syntax looks like this:

number is the value to be converted

from_units is the current unit system

to_units is the desired unit system

However, the CONVERT function is even easier to use if you’ve included your units in a cell next to the value, because you can reference those cells in the function as the “from” and “to” units. See below:

Obviously, for this function to work you need to know the text strings that Excel recognizes as valid units. You can find the official list from Microsoft here.

One thing to keep in mind if you are using Excel 2010 or earlier, though, is that you will not have access to all of the units that are available in Excel 2013 and 2016. Microsoft added to the recognized units in Excel 2013. This site does a good job of showing which units work with 2007 and 2010 vs. those that are only available in later versions.

The CONVERT function can deal with many different unit types, but there are some common engineering units that are not built into Excel. Most of them are “compound units” such as those for flow rate (e.g. gallons/minute or liters/minute), torque (e.g. lbf-ft or N-m), density (e.g. lbm/ft3 or kg/m3), etc.

To deal with these units, we have to break them apart into their individual components and multiply or divide the individual conversion factors.

For example, if we want to convert a torque value of 500 lbf-ft to N-m, the syntax would appear as follows:

Unfortunately, with this method, we can’t choose the cells containing the units as the “from_unit” and “to_unit” arguments to the function. Well, we COULD if we wanted to do some really tricky stuff with the FIND and LEN functions to extract the individual text strings. But that just seems like too much work. J

You can also use data validation to create some powerful automation in a spreadsheet that allows a user to choose the most convenient unit system for them to enter their data. As long as the user selects the correct units for their value, the CONVERT function can change to the appropriate units for further calculations. 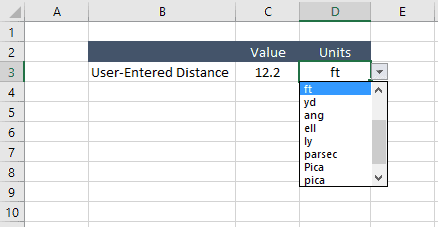 In another cell, enter the “to_unit”. Finally, enter the CONVERT function and reference the appropriate cells.

Hopefully, you’ve gotten an idea of the kinds of things you can do with the CONVERT function in Excel.

Do you use this function a lot? Do you have any other tips to share? Let me know in the comments below.