Manometers come in analog and digital form. The simplest and most well-known manometer is the U-Type, which consists of a glass tube shaped like a U with numbers listed and spaced on each side. A liquid is poured into the instrument until it sits between the legs of the U. When pressure is applied, the liquid moves, and the height is measured. If water is the liquid in the manometer, the height is expressed in inches of water column (inWC). If mercury is the liquid in the manometer, the pressure is expressed in inches of mercury (inHg) or millimeters of mercury (mmHg)

Different manometer equations are used to calculate the pressures of fluids and gases under various circumstances from manometer readings. Open, closed, inclined, and inverted equations are the most used.

This equation is commonly used to measure gauge pressures. The formula is

An open manometer can also be used to measure absolute pressure. In this case, the formula is: 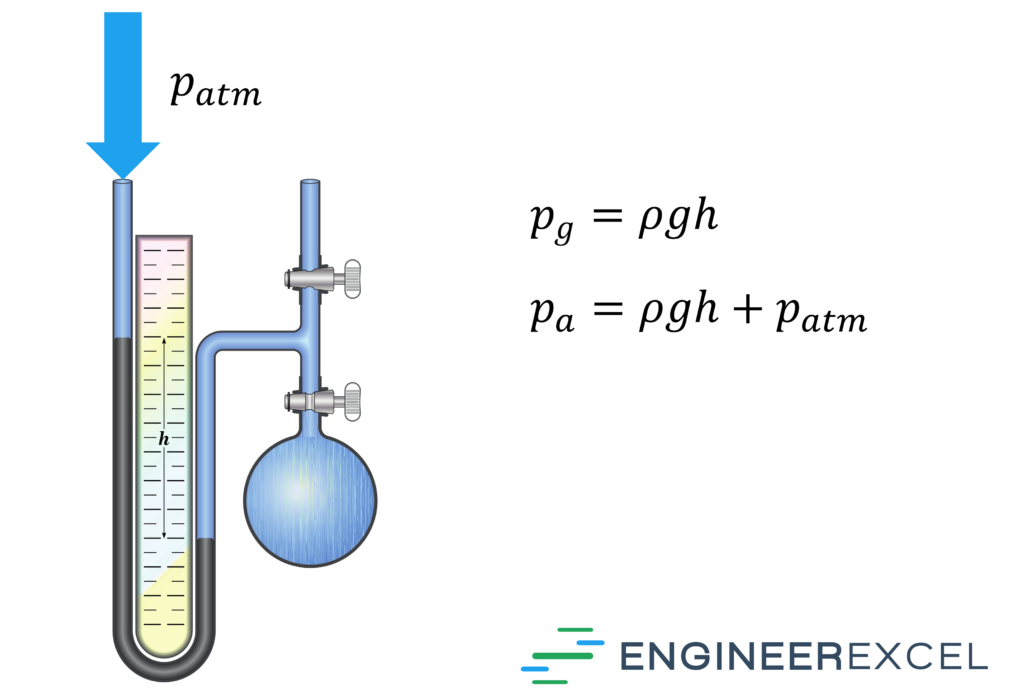 In a closed manometer, the end that is open to the atmospheric pressure in an open manometer is sealed and contains a vacuum.

An inverted manometer is used to measure pressure differences in liquids. Air or another gas fills the space above the liquid in the device and can be bled or expelled through the top to adjust its level. The equation is:

Inclined manometers are useful for situations where the pressure to be measured is small. That’s because the incline of the tube allows for large spacing between the gradations in the cylinder.

A pressure is applied to one end of an open manometer containing mercury. The applied pressure causes the mercury to rise by 100 millimeters. How much pressure is being applied?

Can a Manometer Measure Vacuum Pressure?

The result of a negative h value is that the pressure calculated from the manometer equation will also be negative. Keep in mind that this represents a pressure that is less than atmospheric. To convert this into a positive absolute pressure, just add the atmospheric pressure to it.

Measuring Vapor Pressure with a Manometer

This is the procedure for measuring the saturated vapor pressure of a pure liquid at a given temperature:

1. Measure the density of the liquid.

2. Fill the manometer with an oil.

3. Fill half round the bottomed flask with the distilled water that will be used to measure the vapor pressure. You must then put a stopper in the mouth of the flask.

5. Wait. Allow the equipment to reach a state of equilibrium.

If the meniscuses of oil columns don’t change any more, measure the difference of heights of two oil columns.

How to Choose a Manometer

This type of manometer measures differential pressure by balancing the weight of a liquid between two pressures. It uses indicating fluids such as colored water, oil, benzenes, bromides, and mercury. Water can measure small pressure differences, and mercury large pressure differences. The most important things to verify if you decide on a liquid manometer are the specific gravity, operating temperature range, vapor pressure, and flash point of the indicating liquid.

See also  When to Use Fanning Friction Factor

A liquid manometer is limited, and is not always suitable for work in the field. It can also be cumbersome to use such a kit if most of the rest of your work is done on a computer. All such challenges can be overcome with a digital manometer.

These microprocessor-based instruments are made as portable units or stand-alone mounting styles. It is easier to come to an accurate result with a digital manometer. You will not have to make the same kinds of manual compensations and corrections that are necessary with liquid manometers. These are all done automatically through software.

Advantages and Disadvantages of a U-Type Manometer

Micromanometers have also become quite popular. They are designed to measure pressure differences that are very small. These are the most sensitive manometers in production, and they are most appropriate for any project that requires accurate and precise readings of the smallest differences.

Micromanometers can be used to measure differential pressures, to calculate velocity or volumetric flow rate, and to test or bring into balance fluid systems.