How to Calculate Weighted Standard Deviation

This formula (provided by the United States National Institute for Standards and Technology, or NIST) is used for calculating the weighted standard deviation:

The data is in columns B and C on the spreadsheet.

Make sure “Top Row” is checked and click OK.

Now, the array of values underneath xi has the name xi: 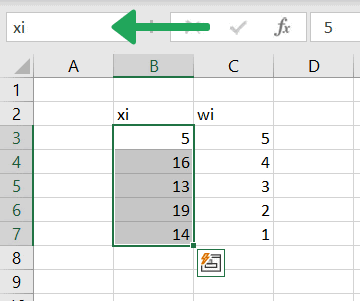 The array of values underneath wi has the name wi: 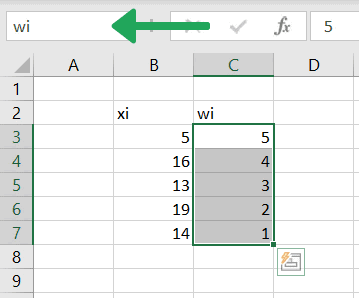 Next, calculate the weighted average of the samples.

We’ll call that xbarw, and the formula for the weighted average is:

The SUMPRODUCT function multiplies each element in xi by the corresponding element in wi, and then sums the resulting values to return a single value.

The resulting weighted average or weighted mean is 12.

Next, count the number of non-zero weights using the COUNTIF function.

The argument “<>0” is enclosed in double quotations because Excel requires a string as an input.

The way to represent “not equal” in Excel (or VBA) is a less than sign followed immediately by a greater than sign (<>).

The total number of non-zero weights is 5.

Finally, calculate the weighted standard deviation by using Excel functions to create the formula from above.

Using Excel functions, the formula is:

What is a Weighted Standard Deviation?

The standard deviation provides information about the distribution between observations in a sample or population.

In statistics, a weight is a value given to increase or decrease the importance of a sample. Typically, weighting is applied when calculating a mean, but it can also be used in a calculation of standard deviation.

The concept of a weighted standard deviation can be difficult to grasp. Essentially, it calculates the spread in a data set where not all the observations have the same weight.