Now that we have User Defined Functions under our belts, let’s take a look at Excel VBA subroutines.

Basically, Excel VBA subroutines are collections of code that carry out specified actions on a worksheet.

Unlike UDF’s, they can change formatting of a workbook, delete cells/rows/columns/worksheets, and add data to any cell on a worksheet.

They can even write to external files, open other applications and a lot more.

How to Create an Excel VBA Subroutine

There are two main ways to create a subroutine:

I’ll focus on recording a subroutine with the macro recorder and editing it in the VBA editor in this post.

Recording a Subroutine or Macro

To record a subroutine or macro, click the Record Macro icon in the lower left of the Excel window.

When the Record Macro Dialog box opens, you can give your macro a name, shortcut key, and description. 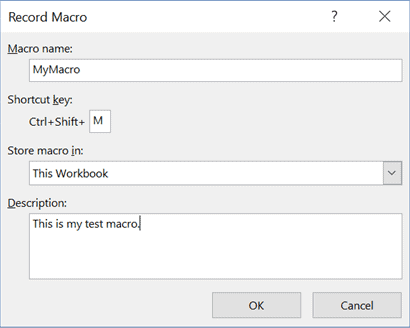 Next, perform some actions in the workbook.

One warning: Excel records everything you do in the workbook. Every scroll, click, etc. So try to be deliberate in what you do with the recorder running – it will make your code easier to understand later on.

In this example, I did three things:

To view the code that was generated during the recording, open the Visual Basic editor by typing Alt+F11 and navigate to Module1 of the active workbook in the Project window. 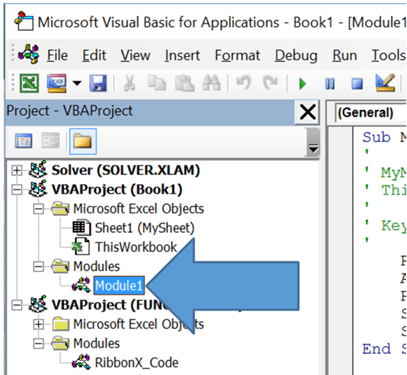 Now, in the code window, we can see exactly how our actions in the worksheet were interpreted in VBA: 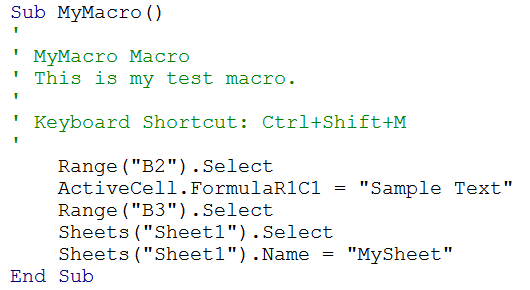 The lines in green are comments. They are ignored when the subroutine runs, but are extremely useful to anyone trying to understand the purpose of the code. To create a comment, just type the apostrophe character, ” ‘ “, followed by the comment text.

Finally, the remaining lines are the actual commands that were recorded.

Line 2: Type “Sample Text” into the selected or “Active” cell

Line 3: Select cell B3 (this command occurs by default when I typed “Enter” after entering the text into cell B2)

Line 4: Select the tab for Sheet1

Subroutines created with the Macro Recorder are fairly straightforward to understand if you just go line by line.

One issue with subroutines created via the Macro Recorder is that they are very specific and lack any generalization. For example, this macro will fail if I try to run it, because it will look for “Sheet1”, which no longer exists.

We can generalize the subroutine by changing a few lines of code.

Let’s delete the last two lines of code and replace them with this line: 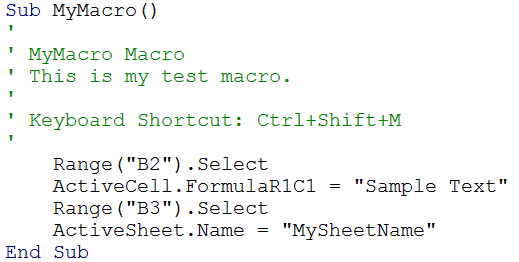 This will change the name of the active sheet to “MySheetName”, regardless of the current name of the sheet.

How to Run a Subroutine

To test it out, we can add a new worksheet to the workbook and run our subroutine.

There are a few different ways to run subroutines:

The shortcut key “Ctrl+Shift+M” works nicely in this case because we assigned it when we recorded the macro.

So with Sheet2 active and any cell selected, I type Ctrl+Shift+M, and the commands are carried out on the active worksheet: 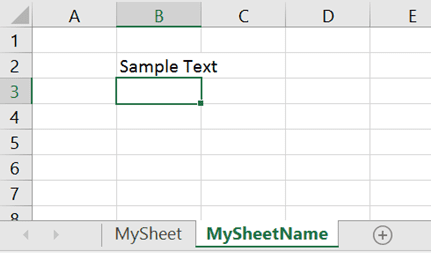 Excel VBA Subroutines are a huge topic, and I just started to scratch the surface here. But go ahead and play around with the Macro Recorder and see what it can do (on a workbook that’s not important, of course!).

Do you have an engineering spreadsheet that would benefit from a subroutine? Let me know about it in the comments below!