Fluid dynamics – and more specifically, fluid flow – is the study of how fluids (both liquid and gas) move when subjected to unbalanced forces. Flow can either be laminar or turbulent.

Laminar flow occurs when fluid particles are moving together in the same direction in parallel paths. It’s defined as smooth, steady motion where there are no disturbances or eddies. Turbulent flow is characterized by fluid particles that may travel in the same general direction but whose motion is noticeably more chaotic. Rather than traveling in parallel paths, the fluid particles collide and mix, creating eddies and disturbances. Turbulent flow usually results from low viscosity fluids moving at high velocities.

This article will describe the differences between laminar and turbulent flows in greater detail, introduce the Reynolds number and explain how it is used, and identify real world applications that incorporate turbulent flow.

The type of fluid flow is primarily dependent on the viscosity of the fluid and the velocity at which it is moving. Laminar flow is smooth and often occurs when fluids are either more viscous or moving at a slower pace.

Imagine a highly viscous fluid like maple syrup being poured from a bottle. Even if the syrup were moving at a high velocity, the syrup is viscous enough that its individual particles would still tend to travel in parallel paths because there is too much friction and resistance for them to overlap. It would take a very high velocity for inertia to overcome the viscous force.

Turbulent flow occurs when the opposite criteria are met. Flow tends to be turbulent when there is a low-viscosity fluid moving at a high velocity. Low-viscosity fluids have minimal resistance between individual particles so moving at a moderately high velocity generates enough inertia to overcome the resistance between particles. Because the inertia force is dominant, particles are able to move in random directions and mix.

Fluid flow is divided into three regimes: laminar, transitional (or critical), and turbulent. The most common method for determining flow regime is to calculate the Reynolds number, which is a unitless value that represents the ratio between inertia forces and viscous forces. This is a numerical interpretation of the correlation between inertia and viscous forces described in the previous section.

Calculating and Using the Reynolds Number

The Reynolds number can be calculated using the following equation:

Exceptions to the Reynolds Equation

It’s worth noting that the Reynolds equation assumes the fluid being used is incompressible and of constant viscosity. The flow of compressible fluids (gasses) is evaluated using other calculations, including the continuity equation and the Navier-Stokes equation. Fluids that do not have a constant viscosity, known as non-Newtonian fluids, are also treated differently. Non-Newtonian fluids like ketchup, quicksand, and paint will change viscosity based on forces applied to them.

Turbulent flow is encountered in many scientific fields such as engineering, aerodynamics, meteorology, and biology. Some scenarios are straightforward and can be analyzed relatively easily, like trying to calculate friction and flow rate in a pipe. Trying to optimize the shape of a vehicle for aerodynamics (air flow) is a bit more complex and requires different analytical methods.

Computational Fluid Dynamics, also known as CFD, is a specific branch of fluid mechanics that is used to solve problems related to fluid flow. CFD analysis is used in a variety of science industries, notably aerodynamics, weather simulation, environmental engineering, and heat transfer.

Because turbulent flow is constantly fluctuating and chaotic, it is difficult to analyze numerically. Many people working with fluid problems on a regular basis rely on high-tech computers and software to run simulations and calculations. Simulation software can be used to analyze everything from the airflow around a plane’s landing gear to the projected path of pollution from factory exhausts. 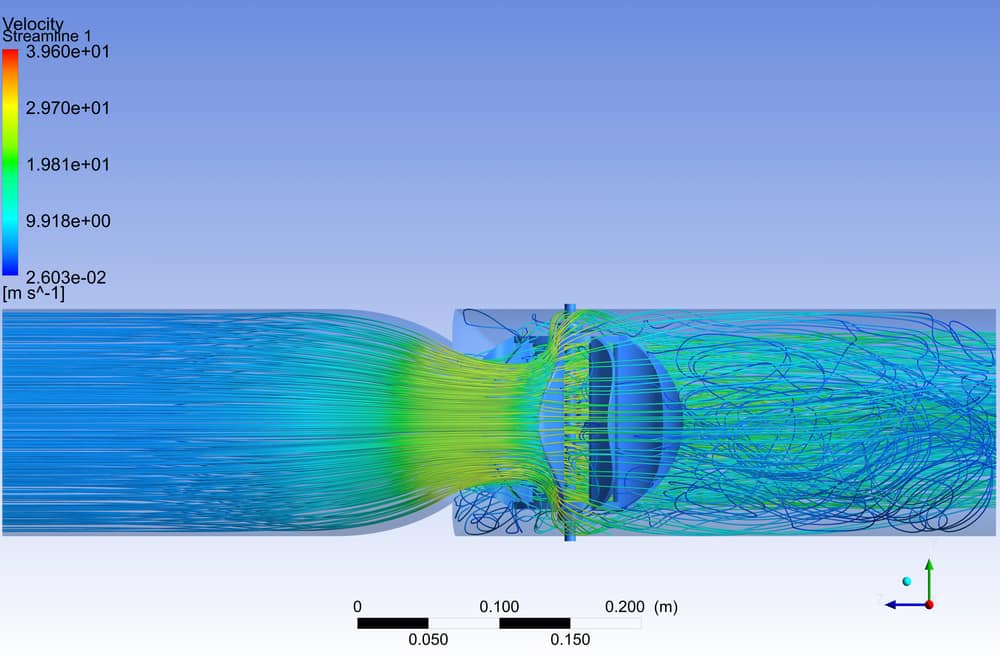 Engineers designing pipe systems have many important parameters to evaluate. Laminar and turbulent flow may not be the main problem they’re solving, but the type of flow still makes a difference.

Turbulent flow is utilized in many forced convection systems such as heat exchangers, air conditioners, and fans, as well as natural convection phenomena like a breeze or tectonic plates that rely solely on buoyancy and gravity.