Excel’s Solver add-in can be used to find the best-fit line for nonlinear data. Worksheet 07f contains the flow and pressure data that was used in a previous example to illustrate fitting with LINEST.

The worksheet already has columns for measured flow, measured pressure, and calculated pressure. As before, you’ll use Solver to do a least-squares fit, so you’ll also need a column for error. Insert a column beside the Pcalc column and label it Error. In the first cell of this column, calculate the difference between the calculated value and the measured value:

Double-click the fill-handle to complete the column.

Recall that the Solver needs a single cell to minimize. Add a row below the coefficients for the overall error. Enter the formula:

You can minimize the error by changing all three coefficients simultaneously. In the box for the variable cells, select the three coefficients (currently all set to 1). No constraints are needed. Leave the algorithm set to GRG Nonlinear and click Solve.

The coefficients that Solver found are not the same as those that LINEST found. That’s because GRG Nonlinear can give different results based on the initial guess values. Since we used guess values of 1, Solver found a local minimum near those values. This wouldn’t be obvious if you were using the Solver method alone and hadn’t seen the LINEST results.

However, the coefficients Solver found are close to the LINEST results, and they give a good fit to the measured data: 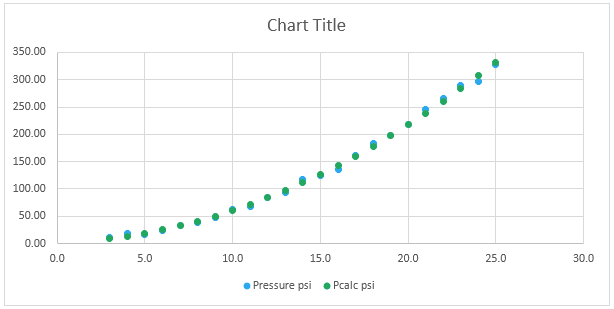 The curve from the Solver fit can be used to accurately represent the measured data in subsequent calculations as necessary.