A Moody Chart (or Moody Diagram) is used to estimate the friction factor for fluid flow in a pipe. The chart represents friction factor as a function of Reynolds number and the ratio between internal pipe roughness and pipe diameter, or relative roughness, ε/D. 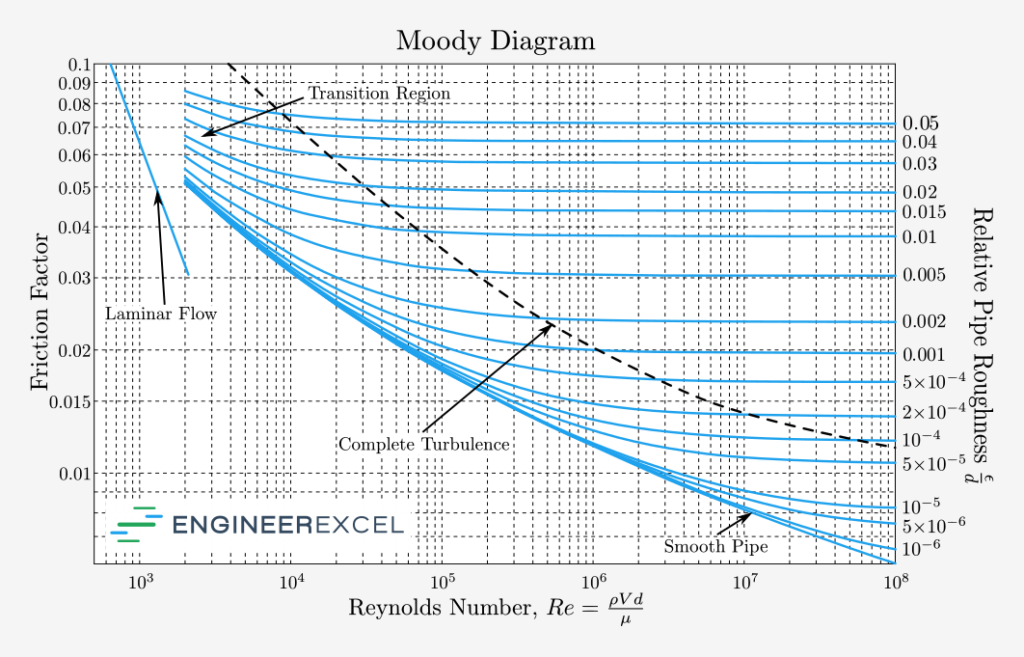 What is a Moody Chart Used for?

The Darcy Weisbach equation is commonly used for calculating pressure drop in a pipe due to friction, otherwise known as major losses. One of the terms in the equation is the Darcy friction factor. Friction factor is an empirical term that can be determined by solving complex formulas or by simply looking it up on a Moody chart.

Although using a Moody chart is easier to use for one-off calculations, it is not always useful for repetitive calculations or automation of pressure loss calculations due to the need to interpret values from a chart.

How to Read a Moody Chart

To read a Moody Chart, first calculate the relative roughness of the pipe, ε/D. ε is the roughness height of the internal walls of the pipe and is published in many tables.

If the relative roughness of a pipe is 0.001, find the corresponding curve from the right side of the Moody diagram (1). 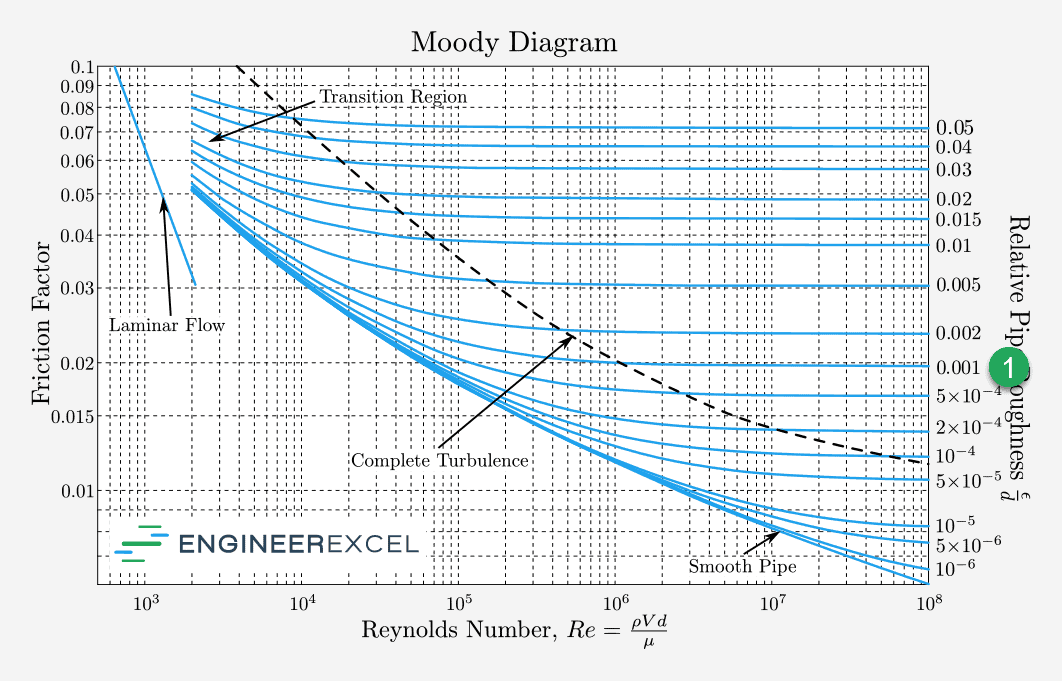 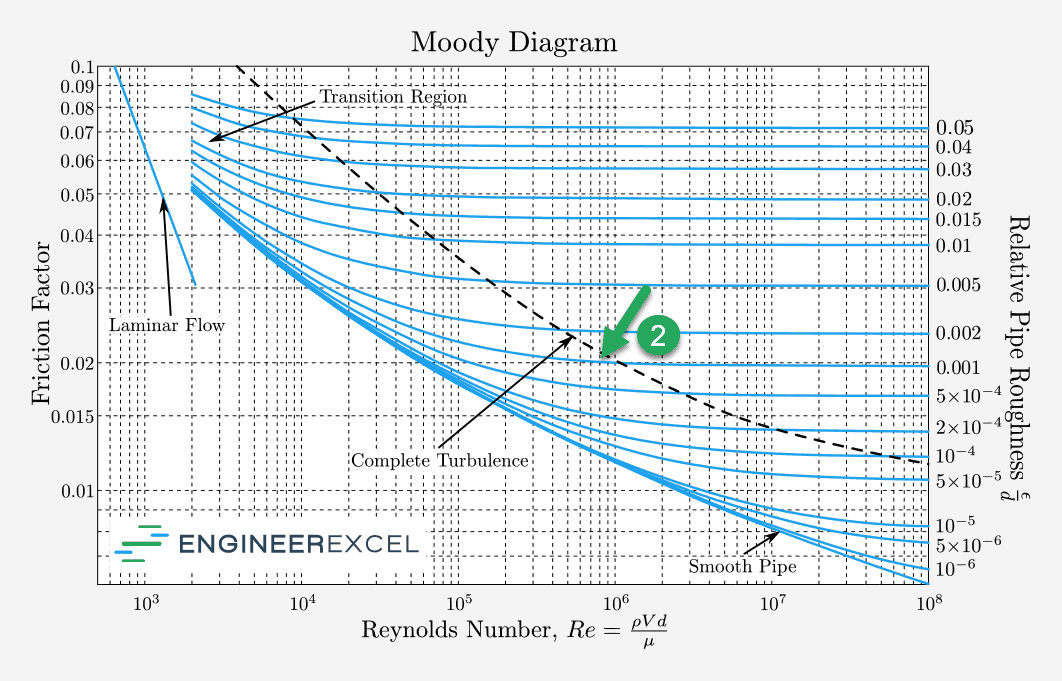 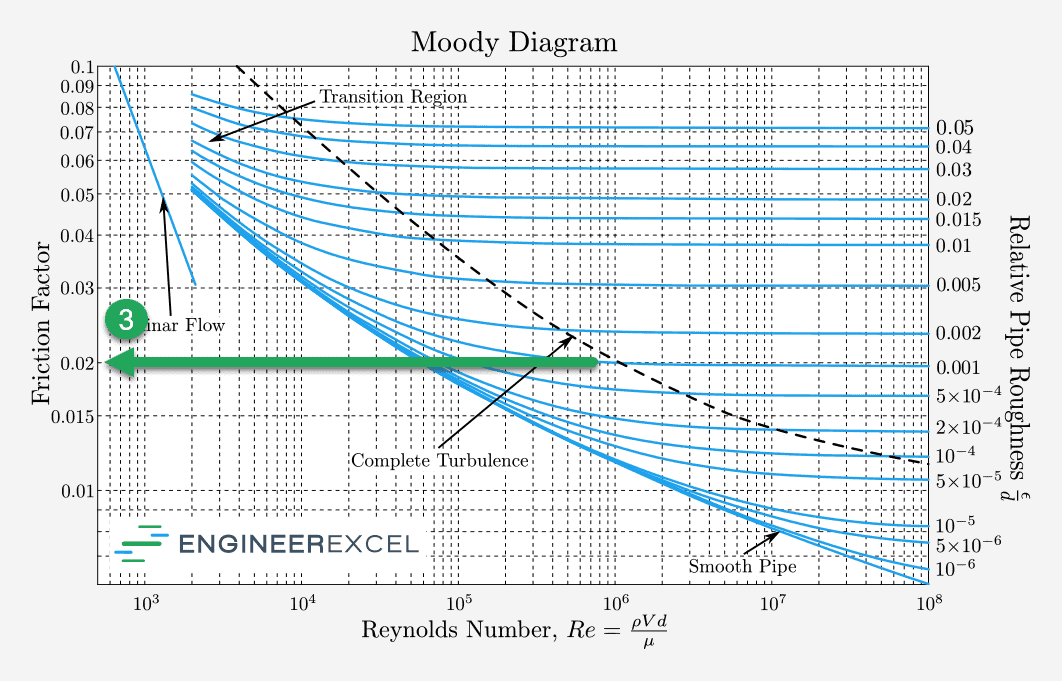 You can download a .pdf file of a Moody Diagram by clicking on the image below: 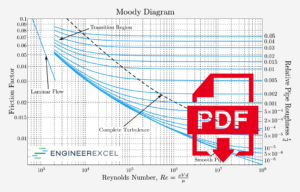 How Accurate is a Moody Chart?

A Moody chart is only as accurate as the exactness of the inputs. The most significant source of error, besides reading the chart incorrectly, comes from the roughness height. Values of roughness height found in tables are estimates at best and can vary widely for the same material from different sources. The only way to obtain a truly accurate roughness height is to measure it with a tool like a profilometer.

However, when it’s impossible or impractical to measure roughness height directly, estimates are necessary. In these instances, it is worthwhile to conduct a sensitivity analysis to see how behavior changes with variations in roughness height and friction factor.

Moody Diagram and the Colebrook Equation

The Colebrook Equation is an implicit equation that relates the Darcy friction factor to the Reynolds number, diameter, and pipe roughness, much like the Moody chart. However, it’s a complex equation to solve.

The Moody diagram was created in the early 1940’s before the use of calculators and computers became commonplace. Lewis Moody solved the Colebrook equation for many different combinations of Reynolds number and roughness height and plotted them on a chart.

The bottom curve on a Moody chart shows the relationship between friction factor and Reynolds number for a smooth pipe. A theoretically smooth pipe would have a roughness height, and thereby a relative roughness, of zero. However, such a pipe does not truly exist.

However, the same flow rate through a similarly sized pipe with a very rough wall will be turbulent near the wall because the roughness of the wall will dominate the flow by causing turbulent eddies and overcoming the tendency of viscosity to make the flow laminar.