The resulting flow values can then determine the depth of the water or the maximum flow capacity. While computers have made more accurate methods practical, Manning’s equation is still commonly used due to its simplicity and versatility.

What is the formula for the Manning Equation?

To calculate the cross-sectional average velocity, use the following formula:

Due to the reliance on the wetted perimeter, the Manning equation can account for the changing flow conditions as the water level in a channel or pipe varies.

Using the cross-sectional area of flow, A, the volumetric flow rate can be estimated using the following formula:

By using the above formula, the flow rate version of the Manning equation is shown as follows:

The variable of k in the Manning equation is a conversion factor between Metric and English units. When using metric, the value of k = 1; when using English units, k = 1.4859.

The English form of the Manning equation uses the following variable units:

The Manning equation only applies to the flow of water. It is also limited to uniform flow with constant channel slope, shape, material, flow area, and flow velocity. This method is only used when the flow’s driving force is from gravity. The equation balances the force of gravity with the resistance from friction.

Due to its empirical derivation from observation of actual conditions, the Manning equation accounts for turbulence as long as the flow is uniform.

By rearranging the Manning equation, many parameters of interest can be found. For example, the fluid depth in a culvert can be found for a given flow rate. This is useful for ensuring the culvert can provide an adequate flow rate for irrigation or for estimating the depth of water drained during a storm. Likewise, solving for the steam slope can find the minimum slope required for a culvert of a particular dimension to flow a given amount of water.

Alternatives to the Manning Equation

The simplicity of the Manning equation has ensured that it remains a commonly used and widely accepted method; however other alternatives exist.

The Hazen-Williams equation, like the Manning equation, is only valid for the flow of water at near room-temperature values and at flow velocities similar to those experienced in agricultural or industrial systems. The structure of each formula is nearly identical.

The velocity version of the Hazen-Williams equation is:

The two processes are slightly different. The Manning equation balances flow forces from gravity against friction. In contrast, the Hazen-Williams equation determines the pressure loss per length of pipe. The naming of the variable S is different, but they are mathematically equivalent.

For flow in pipes, the Darcy-Weisbach equation is typically used. This method remains valid when the driving force is something other than gravity, such as a pump. It also does not rely on uniform piping geometry or surface roughness.

The Darcy-Weisbach equation is better at modeling systems with fittings such as valves and elbows. Using tables of equivalent pipe length, these are treated as being equal to additional piping. Because the Manning equation doesn’t consider pipe length, this additive method does not work.

Another advantage of the Darcy-Weisbach equation is the ability to determine pressure loss in the system. In the case of a piping system with multiple outflows, the Manning equation would require each section of equal flow to be independently calculated. An example would be an irrigation system with branches leading to different fields.

Unlike the Manning equation, the Darcy-Weisbach equation can determine the flow rate or velocity that would cause a transition between laminar and turbulent flow.

HEC-RAS is a computer program for determining water flow driven by gravity in open channels. This program was funded by the United States Government and is available to the public at no charge. Much of the underlying program architecture uses the Manning equation.

In cases of open flow for drainage or irrigation, using HEC-RAS is considered one of the most accurate ways to model flow.

One of the most common uses of the manning equation is calculating flow rates for stormwater drainage. In this example, an existing drainage path will be examined to determine its flow capacity at the overflow point.

A smooth concrete drainage ditch has a cross-sectional profile of an isosceles trapezoid, as shown below. Given a grade of 2%, what will the flow rate be when the ditch is filled, as shown? 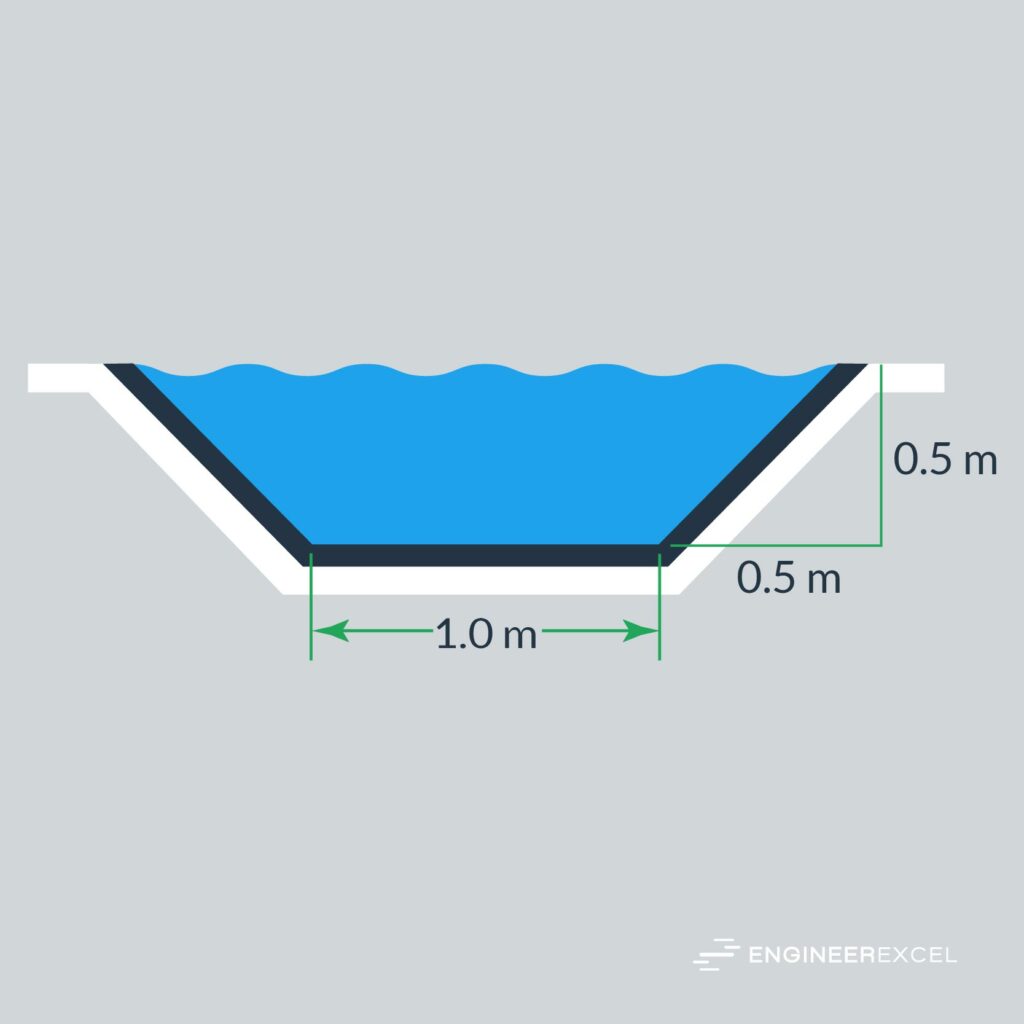 Starting with the traditional form of the Manning equation, it is rearranged to solve for volumetric flow:

Substitute to solve for Q:

The result is the Manning equation for volumetric flow rate.

The value of k = 1, as the problem is being solved in metric units.

The Manning roughness coefficient, n, is found in the table. In this case, the value for wood form cast concrete is chosen. Therefore, n = 0.015.

Because the problem statement states that the ditch is full, the cross-sectional flow area, A, is the area of the trapezoid. Therefore, A = 0.75.

From the dimensions given, the hydraulic radius, Rh, is found by dividing the cross-sectional area by the perimeter of the portions of the trapezoid that are wetted. Therefore, Rh = 0.31.

A ditch, as described in the problem statement, can pass approximately 3.24 m3/s when filled.

Example 2: Finding the required slope of a water supply pipe

A water tank on a hill will supply water to a fire engine. The pipe will be made of 4” Schedule 40 PVC and must flow 0.03 m3/s. What is the minimum required slope for this pipe?

In this example, the value to be determined is S. Since one of the input values is the volumetric flow rate, that version of Manning’s equation will be used.

The Manning roughness coefficient, n, for PVC is 0.010.

Solving for the slope, S:

The pipe in question will require a slope of at least 7.3%.

Please confirm deletion. There is no undo!