A moment is the force that tries to pull on a beam or other object to rotate it. A moment connection is a type of joint that acts to prevent this turning force, transferring the energy away and keeping two beams solidly in place.

What is a Beam To Beam Moment Connection?

A moment connection is a structural joint that opposes bending moment forces. While these bending moments are present in many everyday objects like chairs or couches, they are most commonly studied in beams. A beam under even the force of just its own gravity will produce a bending moment trying to rotate it in a circle away from its origin point.

A beam-to-beam connection is a welded joint between two beams. Typically, one beam acts more like a vertical column where the other protrudes horizontally off of it. This is a common structural support found in buildings and bridges.

Often these are known as “cantilever beams”. Think of a sign hanging off a building, displaying the name of a store. That sign is indeed hanging off a beam, applying a moment force at the end connected to the building, trying to tear free from the brick and mortar.

Types of Beam to Beam Connections for Moments

Moment resistant connections are most often used in single or multi-story buildings, often made from metal beams that support large amounts of weight. There are several ways these connections are made between beams, or between building wall and beam. Here we’ll discuss some of the most common types. Note than we say “beam connections” often we are speaking of an I-beam configuration, a common type of structural beam.

An important distinction to make before moving forward is what an “end plate” is. An end plate is usually a flat metal plat welded to the skinny vertical portion of the I-beam, and then bolted to the wall or other surface. This plate needs to be tightly within dimension tolerance, as it is an integral structural component that needs to fit within the I-beam.

While these plates are inexpensive, they do have a downside. Once made, there is no adjusting its length or the height of the beam. If the end plate does not fit nicely with the I-beam, it will need to be remade.

Often these end plates are made of steel, though they can be different materials. Similarly, most I-beams are made of some variation of structural steel.

A partial depth end plate is one that does not stretch the length of the thin portion of the I-beam. Instead, it stays within the bounds of the two horizontal extensions that cap the I-beam. These plates will typically suffice for a lot of applications, as they can withstand up to 75% of the shear/moment resistance brought on by the beam.

An extended end plate does exactly that: it goes beyond the height of an I-beam, extending above or below or both to offer more resistance to the moment force caused by and on the beam. It can cover over 100% of the moment force brought on by the beam, allowing for more weight to be added on top of the beam, or otherwise providing a redundancy of support in the case of structural failures. 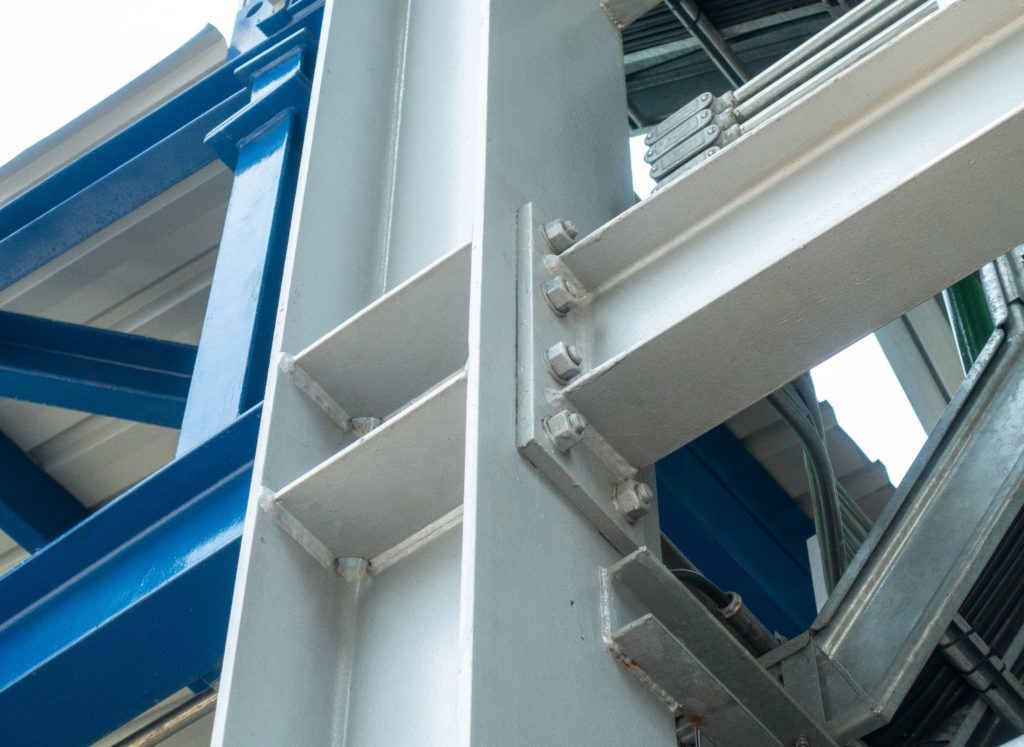 A stiffened extended end plate brings the addition of a triangular wedge welded on to the top and/or underside of an I-beam. This steel triangular wedge sits evenly in the middle of the top of the I-beam, further extending the support of the moment resisting to connection to beyond just the area of the I-beam after it is welded on. 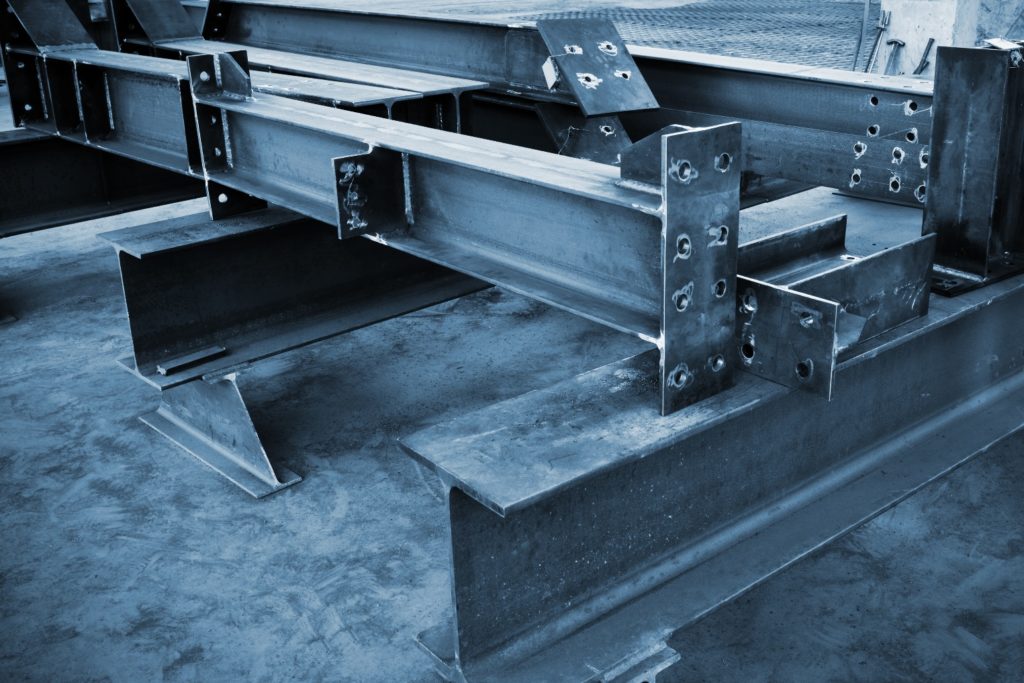 A haunched beam connection is similar to a stiffened extended end plate but welded to the bottom of a beam instead of the top. Additionally, when a reinforcement haunch is added beneath a beam, the beam is angled upwards away from the wall, in the way the rafters of a home might be. A haunch is much larger than a stiffener extension, almost existing like a second, smaller I-beam supporting from the underside. While a haunch provides much greater support (while also causing a second moment force on itself), it is not advised to use these connections unless necessary, as they require tightly toleranced and expensive fabrication. 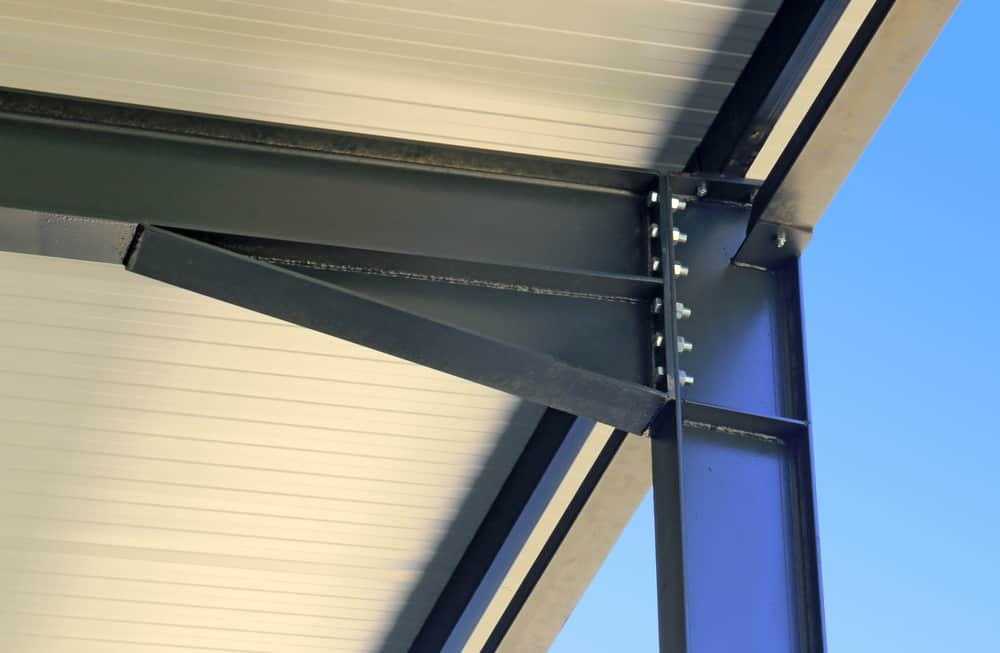 There are a number of situations that will induce a moment force on a beam-to-beam connection. The formulae used varies from case to case, especially given the context of the supports of the beam. For instance, a beam hung from only one end, like in the case of a store sign hanging off of a wall, will experience a bending moment that is different from a structural I-beam of a building welded to other beams on both sides.

Here are a number of sightly varied equations that may be used to calculate moment forces on beam-to-beam connections. Note that the equations will look largely similar, changing with the location of an applied load (if there is an applied load or just the internal beam load), as well as with the locations and type of supports of a beam (whether they are hanging from a wall or beam, or supported underneath).

Uniformly Distributed Load for a Beam Fixed at One End

A single beam to beam connection with a uniformly distributed load is the case of a beam connected at one end only, with the resulting moment force from just the weight of the beam, applied at the connected end. Think of a beam attached to a wall, but with no sign hanging off of it.

Concentrated Load for a Beam Fixed at One End

This is something like the case of a sign hanging off the beam connected to a wall or other beam at one end. Here a downward force (e.g. the weight of the sign) is pulling down at a specific point, causing a moment force at the connection.

These two equations show how the amount of moment force induced depends on where along the beam the concentrated load is. If the load is all the way at the free end of the beam, the moment will be highest. As the load moves in closer to the connection joint, it decreases. In real world scenarios, engineers will also need to factor in the moment force of the beam itself, like in the example.

This is the case of a structural support beam with connections at both ends, no concentrated load, just the weight of the beam itself causing moment forces.

Here the beam is supported at both ends, so the moment force is split between both fixed connections. Note that the beam also experiences an internal moment, highest at its center point. This is true for any beam under its own weight.