How to Add a Third Y-Axis to a Scatter Chart

The other day I got a question from Todd, an EngineerExcel.com subscriber. He uses Excel to create charts of cam position, velocity, and acceleration. The industry-standard way of graphing this data is to include all three curves on the same chart, like in the image below. 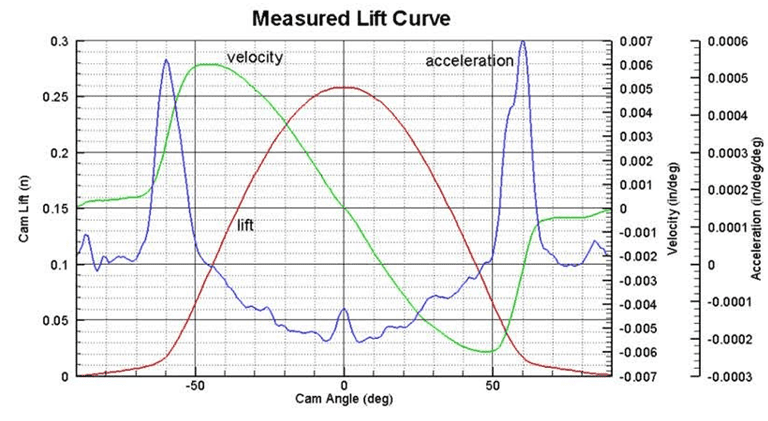 The challenge is that all three curves have very different scales, with acceleration being the smallest. This makes it hard to view the acceleration curve on the chart without a unique axis. So he wanted to know if there was a way to add a third axis to a scatter chart in Excel. Unfortunately, there isn’t, but we can fake one by creating another data series with a constant x-value, like I’ve done in the image below. 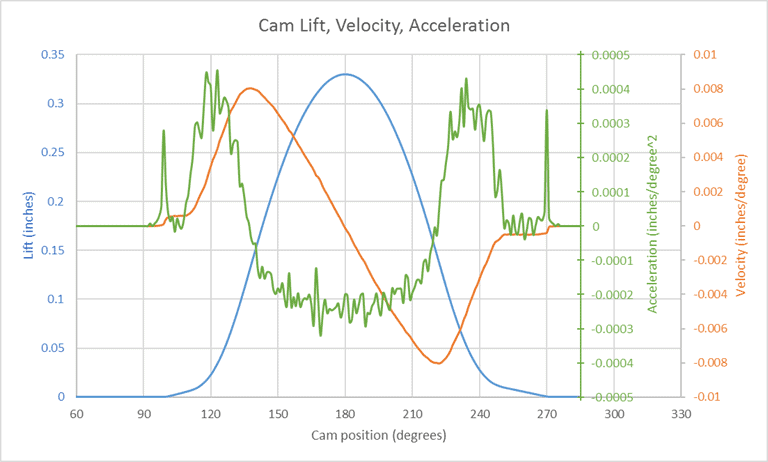 It’s not a perfect solution, but to my knowledge, it’s the best we can do in Excel with the currently available toolset.

Select a Scaling Factor and Scale the Data

Decide on a Position for the Third Y-axis

The third y-axis (which will really be a data series) will be on the chart area, so it has to cross the x-axis at some point. I picked a value of 285 degrees, since the position, and therefore the velocity and acceleration, are zero beyond this point. Of course, we can always change this later. 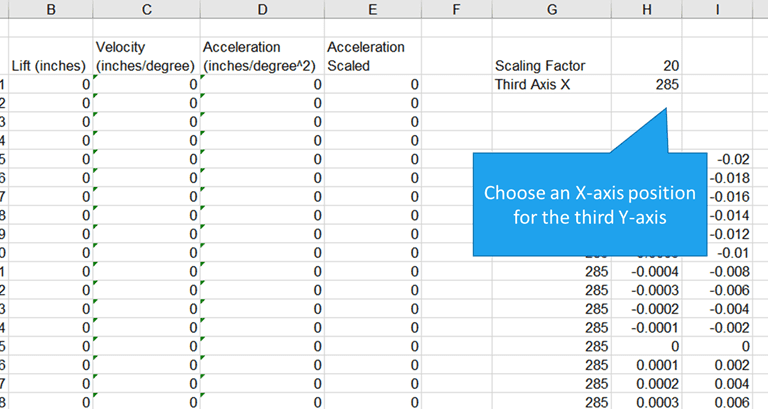 Select the Data for the Chart

The scaled acceleration data could have been on the primary axis. In that case, I would have had to use a different scaling factor.

I also added some color to the axes and axis labels for clarity.

After inserting the chart, I created three arrays:

These arrays were used to create the third y-axis in the next step. 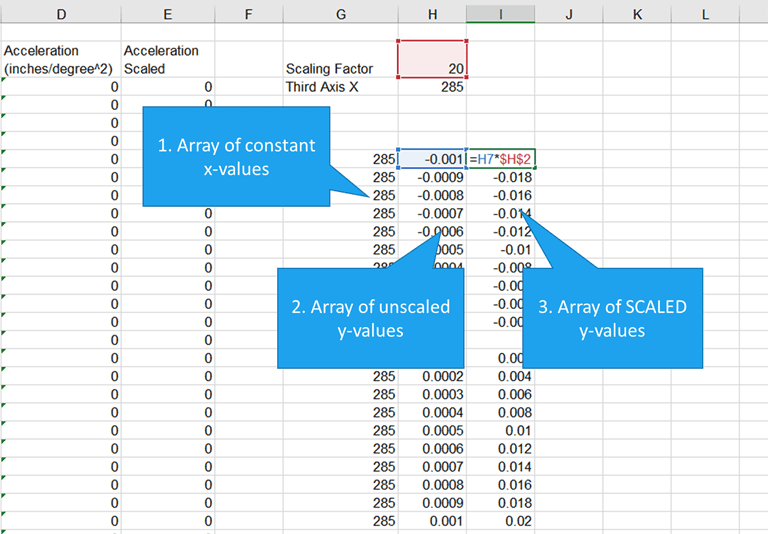 Create an “axis” with a fourth data series

Next, I added a fourth data series to create the third “axis”.

The x-values for the series were the array of constants and the y-values were the unscaled values. 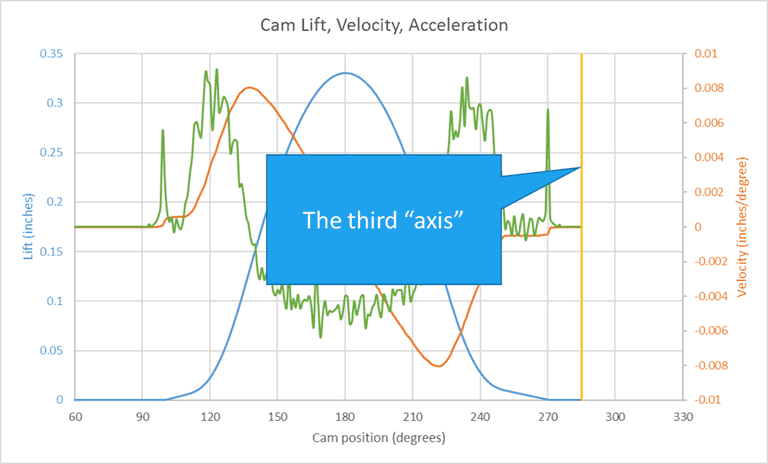 I also modified the line style to match the weight of the other gridlines, added markers (the kind that look like plus signs), and changed the color of the line and marker to match the data series (green). 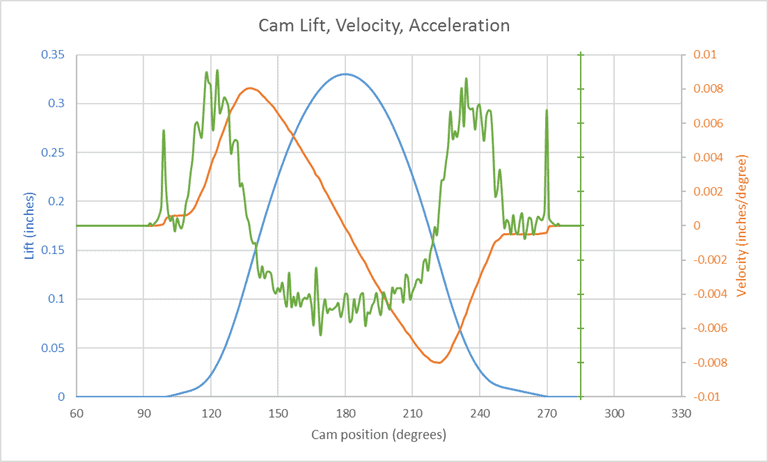 Axis labels were created by right-clicking on the series and selecting “Add Data Labels”. By default, Excel adds the y-values of the data series. In this case, these were the scaled values, which wouldn’t have been accurate labels for the axis (they would have corresponded directly to the secondary axis).

However, in Excel 2013 and later, you can choose a range for the data labels. For this chart, that is the array of unscaled values that was created previously.

So I right-clicked on the data labels, then chose “Format Data Labels”.

Then, in the Format Data Labels Task Pane, I selected the box next to “Values from Cells”.

This opens a small dialog box that allowed me to select a range. I chose the array of unscaled values and clicked OK.

Add a Text Box for the Axis Title

Finally, I added a text box next to the axis and typed in the title. 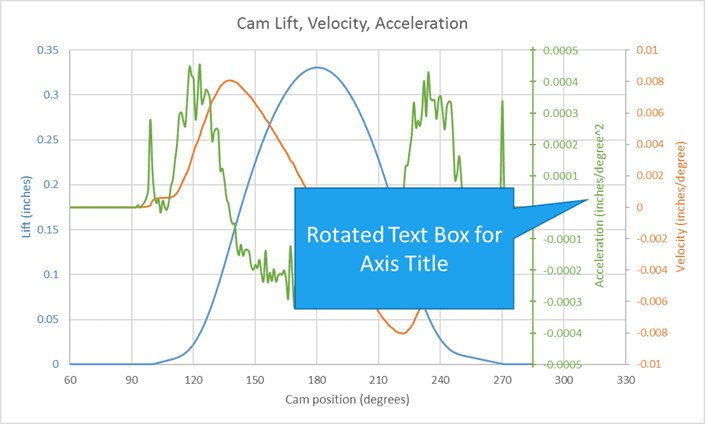 If the data is ever updated, it’s simple to change the scaling factor and/or x-axis position of the third y-axis. Just modify the values in the worksheet, and the third y-axis will update automatically. 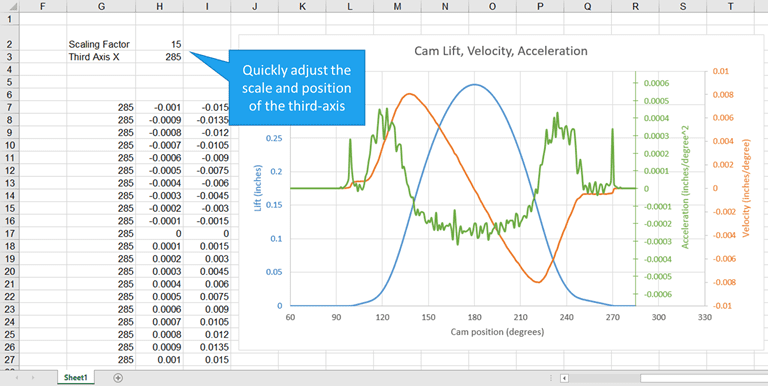